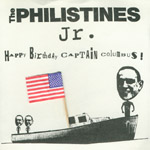 I cannot express how thrilled I was the day I realized that the large quanity of free, mostly-horrible singles I had acquired contained this 7". I have long-standing love for this single, and, more importantly, for the collected works of The Philistines Jr.

For those who do not know, TPJ (no idea if this is an accepted abbreviation, but my fingers are getting sore) have been churning out great indie pop/rock for somewhere around a decade, releasing the bulk of it on their own Tarquin Records. They apparently have a new album ready to go, but are unable to find funding, which ranks up there with the starvation of children worldwide as far as global travesties go in my (admittedly off-base) view of the world. There have to be enough people out there who would chip in $20 or so to help pay for costs in exchange for a copy of the CD when it finally comes out. Aren't there?

Anyway, this may well be my favorite thing TPJ ever released. The A-Side is a brilliant, if historically wrong, tribute to Christopher Columbus (who sailed out in 1492 with 2 ships, according to one of the vocalist) Brilliant.

But nothing compared to the B-Side.

Two great 80's covers: "Melt with You" and "Kids in America" PLAYED AT THE SAME TIME ON DIFFERENT CHANNELS. Sorry for yelling, but it's so damn brilliant. You use the balance to select which song you want to hear! Fabulous! (Except, of course, on my record player, which is mono, so plays them both at once)

Yes, I know this sounds very close to a novelty single (We all know how I feel about novelty bands) and, truth be told, these guys do routinely lapse into novelty recordings in some of their affiliate projects (most notably The Zambonis) but TPS albums are much closer to concept albums with horribly flawed concepts. Like the rock opera about a sinking of a ship that takes place in reverse chronological order. Not terribly funny, just amusingly misguided.

Misguided... and brilliant, that is.