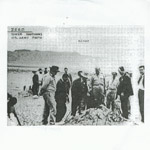 This appears to be an emo band. I've never heard of them. Maybe they're not emo anymore. I'm having a hard time figuring out what emo is. What I think of as math rock appears to have become emo somehow. I'm confused. Emo also seems to sell a lot of copies of records, which doesn't exactly coincide of my memories of Heroin failing to draw more than about 15 people to come see them. Maybe I'm just out of touch. Wouldn't surprise me in the least.

Anyhow, Niner's doing the slow/quiet thing interspersed with the loud/screamy thing. And they like waltz rhythms. That makes 'em emo in my book. Pretty good. "One Force Down" is fun to rock out to. "Trinity"'s a little boring, but not bad to chill out to. Plus the label was giving them away, which either means it's funded by a trust fund baby or they are really into the whole socialist punk rock thing. Either way is okay with me

Rating: B (I appear to be a sucker for old-school emo)