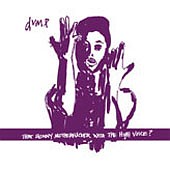 Those of you out there who are big Chucklehound Entertainment fans will notice that the corporate headquarters for Chucklehound relocated about a year ago from sunny Claremont, California (heart of the unstoppable Inland Empire Lo-Fi Rock Revolution) to cold and boring Harwich, Massachusetts. Even though there is plenty to complain about, one of the worst is the lack of availabilty of product from the afore-mentioned Inland Empire scene, most notably Shrimper Records releases. There is an undefinable thrill at being able to go down to your local record store and pick up the latest cassette by the Amps for Christ or Furniture Huschle. Sadly, this thrill is completely lost to me now.

This morning, I popped into the local Border's to get a birthday present for my dad and caught, out of the corner of my eye, a Dennis Callaci record cover. "Huh?" I said aloud. "Did I really see that? I am just going through Shrimper withdrawl hallucinations?"

At this point, numerous people were staring at me as I sprinted towards the music section. "Hell, yeah!" I bellowed at the top of my lungs, as I plunged my hands into the CD racks and withdrew the CD version of Dump's That Skinny Motherfucker with the High Voice.

After spending a few minutes trying to convince the Border's staffers to let me make my purchase before they forcibly ejected me from the store, I took a good look at what I had acquired. It appears to be a CD-reissue of the seminal Shrimper cassette of the same name that was released back in '99 (a cassette, it is worth mentioning, was the first factory-duplicated cassette release in Shrimper's release). A quick glimpse of the track listings reveals that it contains not only the fabulous tracks from the cassette, but bonus tracks! Who doesn't love bonus tracks? (though, in an ideal world, the cassette would have more tracks than the CD...)

I must say, though, for all my avowed love of magnetic tape and vinyl, there is something to be said for the peace of mind of knowing that I can leave this in the car without it being melted into plastic scrap. (I've gotten in the habit of buying multiple copies of Shrimper tapes for exactly that reason...) The bonus tracks are nice, but draw from some of the weaker selections in Prince's catalog.

Did I forget to mention that the whole album is a selection of Prince covers? That's the sort of thing you're supposed to mention in these things, right?

I'm supposed to provide interesting info about the band as well? But that's so boring!

All right, all right. I'll give you band info.

Who's James McNew? You're kidding, right?

You need to get out more.

Hey, there's no need for violence! Fine, James McNew is the bassist and sometimes guitarist and vocalist for Yo La Tengo.

You don't know who Yo La Tengo are? To quote Flavor Flav, "I can't do nuthin' for you, man."

To further quote Mr. Flav, "Yo mama's got brass nipples."

No, I don't know what that means either. Leave me alone, I've got a review to finish here.

Where was I? Oh, yeah, this album is a collection of Prince covers done in Dump's usual lo-fi wall-of-sound approach. The production works well on all the songs, but after a certain point, there's only so much you can do with A Love Bizarre. However, the attempts at the more accessible Prince songs (When U Were Mine, Raspberry Beret, 1999) are fabulous and certainly worth having in a nice digital format.