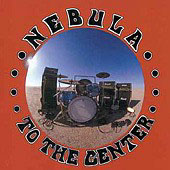 Take The Cult, throw in some Blue Cheer, Failure and Kyuss. What do you get? Two former members of Fu Manchu who slather a percussive assault of harmonics and atmosphere spread thick to tantalize your taste for altered states of reality.

Opening track, "To The Center," lays the foundation with fuzzed-out distortion, Eddie Glass' high-pitched, chorused vocals, and lyrics alluding to flying through space, or something...The next copupla tracks are pretty standard, riff-heavy rockers that include some interesting Rhodes grooves and hand clapping choruses. By track 5, "Freedom," assuming you've followed Nebula's recipe for enlightened listening,you should be in the right state to appreciate the most Desert Rock/Kyuss-like track on the album. Consistent musical and lyrical themes are pretty much standard on the album as a whole: "Freedom," is no exception, and succeeds in delivering a creative, melodic rocker, complete with Sitar, that you wouldn't be embarrassed playing at full volume, in your 81 Camaro, on a mild summer's day. Nebula seem to discover different ways of being "under the influence," though, and it's not until the last 2 tracks that "To the Center" really picks up again. When it does, the last two tracks, "Between Time" and "You mean Nothing" rock out with a vengeance, and leave you waiting for their next release. Overall, great production, and a heck of a lot of fun to listen to.