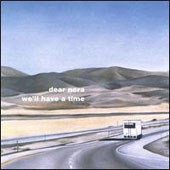 Lately, I've been feeling more than a little unimpressed with pop music. I buy new albums from my favorite bands and respond with a resounding "eh." I try listening to new, much beloved (and hyped) bands (like, say, Death Cab for Cutie) and respond, once again, "eh."

So, the other day on a mailing list someone mentions falling in love with a song by Dear Nora. Never heard of them, but work is slow, so I download "Since You Went Away."

I mean, we're not talking about anything new or groundbreaking. It comes as no surprise that they're from the Pacific Northwest (Portland, to be specific) and have that K Records-lofi vibe to them, but completely missing any sense of self-importance that has made that scene so hard to stomach in recent years. Nothing exciting in the arrangements -- guitar, bass, drums, female vox. Sonically, this band could have released 7"'s on Harriet and fit right in with early Vehicle Flips and Lotus Eaters without missing a beat.

But the songs are so darn charming. They manage to do the light, mid-90's indie pop without resorting to being overly twee (Tokidoki, Jumprope) or overly influenced by the Beach Boys and their ilk (Apples in Stereo).

Really, the only flaw is that the songs are just too short. Most songs clock in at 2 minutes or less, and with only 12 tracks, it's over too quickly.

To get started with Dear Nora, download Since You Went Away from Magic Marker Records now.

-- some more thoughts on Dear Nora a week later --

A day hasn't gone by when I haven't listened to this album, which is saying a lot. It comes with me everywhere. (Incidentally, a drive to the supermarket coincides perfectly with the playing of the first three tracks on the album. What timing!

I can already tell that this is going to be THE album I associate with Spring 2001.

Rating: A- (Would be higher, but the songs just aren't long enough)